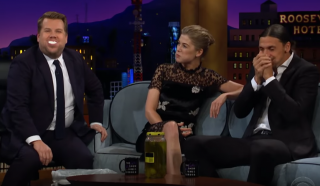 Talk about an unrealistic transfer rumour.

The former Manchester United appeared as a guest on Corden’s The Late Late Show and a potential transfer to West Ham was discussed before the show went on air.

“I’m here with my buddy James,” said the Swede. “He wants me to come to West Ham, but I’m saying they cannot afford me.”

My buddy @JKCorden what do you want? West Ham or more viewers for the @latelateshow ? pic.twitter.com/s5YPUSbtVY

He was also asked to pull off some stunts on the show, such as opening a jar of pickles, ‘flossing’ and talking with a mouth full of marshmallows.

It comes as no surprise that Ibrahimovic has become a big hit in the United States. He recently featured on The Ellen DeGeneres Show as a surprise guest along with the twelve young boys who were trapped in a cave based in Thailand back in June, as per The Irish Times.

The young team, representing Wild Boars Football Club, were pictured on the sofa with Ellen and their hero Ibrahimovic.

There was no story more captivating this summer than the Thai soccer team trapped in a cave. This Monday, they’re all here. pic.twitter.com/J6oQlFZBGG

They each received a shirt with Ibrahimovic’s name on the back and were invited to a training session with LA Galaxy.

Ibrahimovic topped the list for MLS shirt sales in 2018 and has scored 22 goals in 26 games for LA Galaxy.