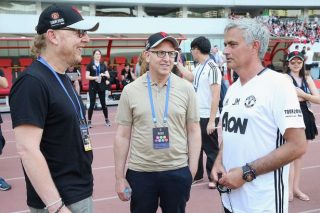 What did the Glazers expect when the club appointed Mourinho as manager back in 2016?

José Mourinho never shies away from controversy. He has always been a confrontational character, who treats power as an essential tool to his management and will overstep boundaries when he finds it necessary.

But apparently the Glazer family now fear Mourinho’s ‘outbursts’ could damage the club’s global reputation. The Sun claims he has been told to bite his lip in future by the Florida based leaches.

While Avram Glazer pulled out of an investment forum in Saudi Arabia this week following the gruesome murder of journalist Jamal Khashoggi, as per The BBC, the Glazers are likely to continue cosying up to their Saudi friends such as Prince Mohammed bin Salman.

With that noted, it’s hypocritical on their behalf to be worrying about global reputation when theirs firmly remains in the gutter, the money-pinching parasites.

However, Mourinho has found himself in trouble with the FA this season for swearing in Portuguese after the 3-2 win over Newcastle and he was also reminded to control himself following the fracas at Stamford Bridge last weekend.

The pressure is on the United boss to keep his job, make no mistake about that, but harsh fines and potential suspensions from the FA are only making matters worse. This a man trying to fight his way out of a corner, without public backing from the club, so how they apparently feel the need to tell him to ‘shut it’ is beyond me.

Mourinho won’t take sh*t from anybody and nor should he.

And this is not a ‘defend Mourinho at all costs’ piece either, but the damage the Glazers have caused this club since their takeover in 2005 is sickening. Their plan has always been clear. To drain the last drip of milk from their commercial cash cow unless they can be convinced to sell before it gets that far.

Vice executive-chairman Ed Woodward could not have made it more clear if he tried at United’s quarterly conference call with shareholders back in May. He was asked if the improved performances in the Premier League last season had influenced the financial side of things.

Woodward replied, as per RTÉ: “Playing performance doesn’t really have a meaningful impact on what we can do on the commercial side of the business.”

The football model at United is either wrong or non-existent and with these businessmen at the wheel, it’s going to get worse before it gets any better.

It’s worth noting also that this the first time we’ve heard the Glazers allegedly step in and restrict the manager of his duties. It brings us back to the question: what were they thinking appointing Mourinho as gaffer?