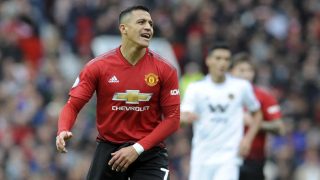 Alexis Sanchez is ready to leave Manchester United in the January transfer window after becoming ‘deeply disillusioned’ at Old Trafford, according to a report in the Mirror.

The report claims that United’s number 7 is keen on a winter switch to French giants Paris Saint-Germain, instead of fighting his way back into manager Jose Mourinho’s plan following Antony Martial’s revival.

Sanchez is said to have become increasingly frustrated after losing his place in Mourinho’s team, after starting just two of United’s last eight games. The 29-year-old can’t complain though, as he’s scored just three league goals since his swap with Henrikh Mkhitaryan in January and missed the Reds’ 1-0 home defeat to Juventus in the UEFA Champions League on Tuesday night with an unspecified injury.

It appears United are now willing to listen to suitable offers for Sanchez, who earns an estimated £500,000-per-week, with the players’ representatives keen to negotiate a move away from Old Trafford.

However, Sanchez’s huge wage demands mean that only a select number of clubs can afford to sign him. PSG’s financial power puts them top on the list of potential suitors, but moves back to Spain or Italy, where he spent time at Barcelona and Udinese, are said to appeal to Sanchez.

It is unclear whether Sanchez would fit into PSG’s attacking side already boasting the likes of Kylian Mbappe, Edinson Cavani and Neymar. Although, it could be the most feasible move for the player who is desperate to play first-team football.

The sale of Sanchez would prove to be yet another failure in the transfer market for United manager Jose Mourinho. Summer signing Fred has yet to prove himself for United, and was not called upon from the bench during United’s defeat to Juventus. Record signing Paul Pogba has also struggled for consistency under Mourinho, with many fans suggesting the player will never fulfil his potential under the Portuguese manager.

PSG neither need or want him so…🙄