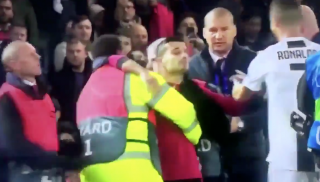 The atmosphere at Old Trafford on Tuesday was much better than usual and a few fans wanted to make the most of Cristiano Ronaldo’s homecoming, even if that meant getting into trouble with the stewards.

Ronaldo smiled throughout the game, especially when he knew the cameras were on him, as if nothing else was on his mind as Juventus faced his former club Manchester United in the UEFA Champions League.

Just minutes into the game a pitch invader was removed after making a crawling attempt to approach the five-time Ballon d’Or winner, however, once the game finished, another fan ran onto the Old Trafford surface and failed for the most part.

However, Ronaldo stepped in once security grabbed hold of the fan and took his phone for a selfie before the individual was dragged away.

A nice gesture, we must add.

Returning to Old Trafford will forever be an occasion cherished by Ronaldo, who spent six seasons in Manchester before engineering a move to Real Madrid.

He had a couple of chances on goal but a stunning save from David de Gea prevented the Juve star from doubling their lead in the second-half.

The Old Trafford faithful sang Ronaldo’s name as he walked towards the tunnel at full-time. He acknowledged their support in what was potentially his final competitive appearance at the Theatre of Dreams.

Juventus now look likely to top Group H with United set to fight for second spot with La Liga club Valencia, who were held to an away draw versus Young Boys on Tuesday night.

However, the Italian fans showed little respect towards Jose Mourinho, who responded by giving another three finger gesture, as per Goal, to remind them of Inter Milan’s treble-winning season back in 2009-10.

But this is Mourinho talking about the past again rather than what’s currently happening, something we’ve mocked Liverpool for down the years…