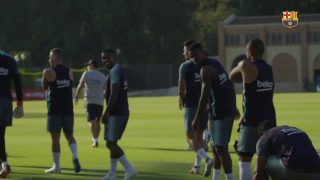 Alexis Sanchez’s struggles at Manchester United may open the door for the club to rejuvenate interest in long-term target Malcom who is set to become available.

That is the angle Caught Offside took from a recent Metro report, which quotes Barcelona chief Grau as saying Malcom is set to be sold just months after signing from Ligue 1 outfit Bordeaux.

However, Malcom has not been linked with a move to United since his Bordeaux days. The likes of Arsenal and Tottenham have instead been noted as possible destinations for the Brazilian to get a fresh start to get his career back on track.

CoS use Malcom as an example target given how poorly Sanchez has done for United following his January arrival. They think manager Jose Mourinho should revive the club’s interest in the young Brazilian when the winter transfer window opens.

Mourinho admitted in April, as per One Football, that he wanted to add more Brazilian players to his squad prior to signing Fred for £52 million. There is nothing to suggest he plans to stop with the former Shakhtar Donetsk midfielder and it was widely speculated by outlets such as The Independent this past summer that he wanted to reunite with Chelsea winger Willian.

He has only made two La Liga appearances for Barcelona, which comes as a bit of a mystery given the hype surrounding Malcom prior to his move to Camp Nou. Why is he being limited to such a little amount of game time? Should United bother chasing an unproven player, currently considered not good enough for Barcelona?

Sanchez’s most recent outing saw the Chile international score a late winner against Newcastle in the Premier League. United fans will hope that was the turning point for his Old Trafford spell, but only time will tell.

Even if Sanchez continues to struggle and United are left with no other choice but to get rid of the Chilean, the club won’t need to go back into the market to find a replacement. They already have a better player with a higher ceiling in Anthony Martial.

It would also be a huge risk to sign an expensive player, who has yet to prove himself at the highest level, based on previous form in the French league. Memphis Depay came to United full of potential but was unable to come to terms with playing for such a big club. At Lyon, however, there’s less responsibility and he’s flourishing.