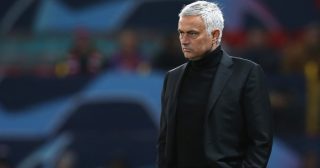 Following last night’s lacklustre performance against Juventus it’s hard to see where Manchester United figure in the overall picture of not just European football but our overall direction this season. Admittedly, Juventus are a top class side that will go very close to winning the Champions League, but it’s games like this that really show how far we have fallen from the top tier.

At one point last night we had 28% possession. For a home fixture, which we should fancy our chances against anyone, that’s a bizarre but not surprising statistic.  Watching players miss control the ball, playing simple passes astray, lumping the ball up to Lukaku and hoping for something to happen are really disappointing aspects that have become the norm with our current squad.

Is that the manager installing a strict strategy that is strangling the creativity out of the players or are the players themselves not as good as we think they are?

The way things stand in the Premier League it’s hard to imagine the Reds making the top four right now. Are we better than Arsenal, Spurs or Chelsea?

I don’t even think it’s even worth asking the question with regards to City and Liverpool.

Arsenal are back to their attacking best and like Spurs and Chelsea are going about their business quietly and efficiently.

Are we now a team that is going to be fighting for a top four place rather than the title? I don’t think Mourinho really believes the title is coming back to Old Trafford so where do our priories lie?

We are not going to win the Champions League, Premier League or the Carabao Cup. We could still end up in the Europa League so our focus needs to be top four finish and the FA Cup.

The season needs a refocus and maybe our expectations need to be checked. Maybe we should try and enjoy the ride and celebrate the positives when they happen and are available.

Watching as a fan, United’s problems seem so obvious to fix but the club seem hell bent on making a profit over prestige. Letting the club sink in to its inevitable demise could set the club back even further than it already has been. The moment Champions League football seemed a very unlikely possibility David Moyes was shown the door. Louis van Gaal tested the fans patience with excruciating painful football and paid the price.

I’m not sure any of those sackings really helped (even if they seemed necessary at the time) and along with the recruitment of certain players from each manager it has had a very detriment effect on the club as a whole. Jose Mourinho is on thin ice but it will be a long drawn out public affair as this is the United way now.

The club has a new identity and way of doing things that you wouldn’t expect from Martin Edwards and David Gill in the past.

So who are United now? We are a club that now has to lower our expectations and hold on for the very bumpy ride. It, of course, could dramatically all turn around and we can look back at this period of time in the club’s history as ‘The Dark Times.’

‘Do you remember when Phil Jones was on corners?’

Oh how we will laugh.

As I have already said, let’s try and enjoy this season as best we can. It does seem this season is already a write off and that’s a depressing thought but soon it will be January and maybe Ed Woodward can give the club something to be look forward to, preferably a decent centre back.