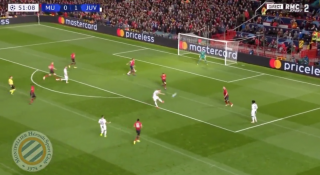 David de Gea pulled off an incredible save to prevent Cristiano Ronaldo from doubling Juventus’ lead in the second-half.

The Spanish goalkeeper has been heavily criticised since his World Cup displays from the summer, and even since returning it has been suggested by some fans that he’s not quite been himself.

But form is temporary and class is permanent. We’ve never been in doubt that De Gea is the best shot-stopper in world football.

He proved that again with a stunning double save in the first half, but it was his save to stop Ronaldo after the interval that will have more people talking.

Ronaldo was sure his effort was hitting the back of the net before De Gea launched into the air and managed to get his finger tips on the ball to send the shot out for a corner kick.

It’s going to take something special from United to get something from this game. We currently trail 1-0, but the Serie A champions are miles ahead in every department.

Our friends at Caught Offside took a look at the reaction from fans at half-time.

Watch De Gea’s save below: