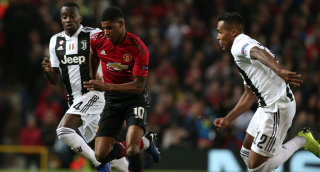 Juventus managed to take all three points from their trip to Old Trafford in the UEFA Champions League.

While the Serie A champions were sloppy in the second-half, hanging on to their one-goal lead, Manchester United looked miles behind before the interval.

Argentine ace Paulo Dybala scored the only goal of the game 17 minutes in and put in an outstanding performance before being substituted late in the second-half.

The best chance for United came from former Juve midfielder, Paul Pogba, who shrugged off a member of the opposition before hitting the post with a curling effort.

But the Reds were unable to find that equaliser and take advantage of Valencia dropping points away to Young Boys in Group H.

United are currently second in the group but next up is an away trip to Turin where Juve may be even stronger. The chance was there tonight to draw level, though Romelu Lukaku put in another shoddy display up front.

Victor Lindelof deserves a special mention for his display tonight. It was by far his best performance in a United shirt.

Moreover, we scanned through Twitter at full-time to see what United fans made of the result and performance.

See their reactions below:

We could honestly be here all night and still wouldn’t score. Painfully bad when we get into the last third of the pitch.

Utd been a bit better 2nd half BUT: they lack 5/6 PROPER players: most are all too middling…

Really unimpressed by our set up, approach, ambition, and overall commitment. Not good enough. V poor.

Never thought I would say this, but great game from Lindelof #mufc

Jose Mourinho holds up three fingers, again, to signify Inter’s treble in 2010 after getting abuse from Juventus fans #mufc

Have to say, that was gash. Front three anonymous, Matic pedestrian, didn’t realise Mata was playing, Lukaku might as well have wore a Juve shirt. Saying that, no expectation. Almost blew it at home to Newcastle, what did we expect at home to Juve!

Really big class difference between us and Juve. Didn’t even lay a finger on them, no substitutions from Jose which was very lazy and an overall lethargic display. #mufc

Terribly meek performance from Manchester United tonight. Juventus clearly an outstanding side, but they're usually a "outwit you tactically" side away in Europe, not a "give you a footballing lesson" side. Tonight it was the latter

Lukaku progressively improved his all-round game throughout last season at #MUFC. This season, he often looks like he’s back to square one as a footballer