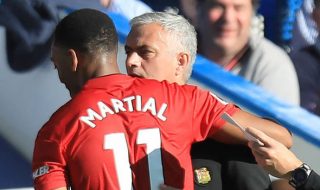 According to RMC Sport in Spain, Anthony Martial is adamant to sign a new Manchester United contract, even if Jose Mourinho remains in charge.

A lot has been made of Mourinho and Martial’s relationship by members of the media and there was a feeling the Frenchman would leave the club unless the manager was replaced.

READ MORE: Mourinho hits out at Spanish media, rules out star player for Juve clash and talks about future as Man Utd boss

Immediately, that sounds like the sort of player power that shouldn’t be welcome at a club like United, but thankfully it appears to be have been exaggerated at some point.

Martial’s current contract expires in July 2019, although reports now suggest he will agree to fresh terms with The Reds in attempt to get his career back on track.

Speaking to ESPN, Martial gave some insight into his relationship with Mourinho: “Things were not tense between us to begin with [before the performance at Chelsea].

“We have a player-coach relationship and I hope that we will continue like that and bring Manchester United as much as possible.

“We were not doing well.

“However, we worked hard and this sort of match enabled us to show that we are a good team.

“We want to continue with another good game against Juventus on Tuesday.

“[The goals] have done me the world of good.”

Under Mourinho, Martial has not been able to cement a spot in the starting line-up. Part of that has been down to his demeanour on the pitch and looking disinterested, but we’re starting to see the Martial of old again.

And his fortunes may be about to change as Martial is beginning to show his form of old and is arguably United’s most clinical finisher.

In United’s previous two outings, versus Newcastle and Chelsea, Martial scored three goals. A much better return than Alexis Sanchez this season, and he’s the man who had been keeping the Frenchman out of the team.

Sanchez is out of tonight’s UEFA Champions League clash with Juventus, so we’re likely to see Martial start on the left again.