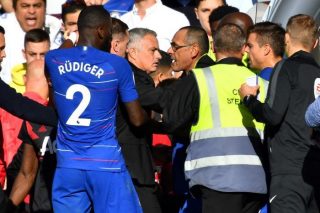 It has become public knowledge that Jose Mourinho could be punished by the FA for the fracas at Stamford Bridge following Ross Barkley’s goal in the 2-2 draw with Chelsea on Saturday.

Mourinho was goaded by Chelsea coach Marco Ianni after Barkley’s late equaliser. He was seen jumping around in front of the Manchester United manager, with stewards forced to step in to stop Mourinho from having a go at the staff member.

Maurizio Sarri made sure Ianni apologised to Mourinho after the match in an attempt to put a stop to the drama, but the FA may decide to put fuel to the fire because Mike Dean included the incident in his post-match report.

The United boss is already in the FA’s bad books (when isn’t he?) for swearing in Portuguese at television cameras after the dramatic 3-2 victory over Newcastle at Old Trafford.

“Not celebrations, bad education,” said Mourinho, when asked about the incident, as per talkSPORT.

“But I also made mistakes in football matches and I will make more.

“So after the game he came to me to apologise, I accepted his apologies, so (have) nothing more to say.

“Maurizio saw. Maurizio said he would take care of it internally, and to accept his apologies, which I did.

“But then the young fellow came, he also apologised and I told him ‘I accept your apology. I also did mistakes, especially when I was your age, and tried to improve.”

Moreover, the Chelsea fans disgraced themselves at the match by constantly abusing Mourinho, their greatest manager of all-time.

Chelsea would be a very different football club without Mourinho and, while you may put that down to Roman Abramovich’s millions, the Roman needed managerial genius to put his puzzle together.

Perhaps a sign of things to come for Sarri.