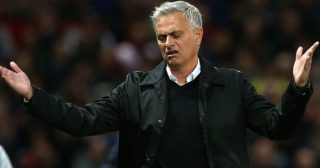 Reminiscent of his Real Madrid days.

According to the Daily Mail, Manchester United manager Jose Mourinho is set to launch an internal investigation into how his team news got out to the public prematurely.

READ MORE: Mourinho may face another FA charge for being goaded by Chelsea coach

Shrager had the team news early yet again on Saturday as United took on Chelsea in the Premier League.

However, Mourinho became angered after discovering his selected line-up to face Chelsea was accurately posted on social media. The manager now wants to know who is responsible for leaking such information.

You must wonder how many people within United are made aware of the starting eleven each week. Obviously, the team members and backroom staff, but anyone else?

Mourinho clearly believes it is an advantage to the opposition when team news gets out in the public domain and Juan Mata’s inclusion on Saturday would have come as a surprise to Maurizio Sarri.

United started the game below par but came back into the game after the interval in chaotic fashion.

Thanks to two goals from Anthony Martial, the Reds came from behind to lead 2-1 but a late equaliser from Chelsea substitute Ross Barkley saw both sides take one point from the game.

Next up for United is Juventus in the Champions League on Tuesday night. Mourinho will be keeping a close eye on social media to see if anyone gets the team news prematurely.