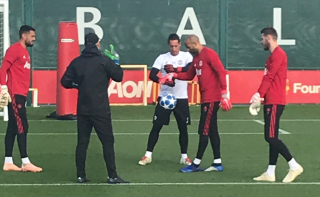 It has been suggested that Anthony Martial would continue to start ahead of Sanchez on the left flank after the Frenchman’s recent displays along with the lack of goals and assists contributed by the Chilean since his January arrival from Arsenal.

Sanchez only has one goal to his name this season – a late winner against Newcastle after United turned a 2 goal deficit into a 3-2 victory.

Last week the Daily Mail made claims that Sanchez is already considering his future at United, just nine months after joining the club. Journalist Adam Shergold suggested Sanchez’s split with girlfriend Mayte Rodriguez has had a negative impact on his football.

The Chile international made a substitute appearance against Chelsea on Saturday and appeared to struggle by constantly losing possession of the ball, therefore, inflicting additional pressure on his teammates while United led 2-1.

Whether or not he is fit to face the Serie A champions, Mourinho is likely to go with Martial on the left over Sanchez. It remains to be seen if Rashford keeps his place in the first time.

It has also been revealed that youngsters Zach Dearnley, Tom Sang and Tahith Chong have all been called up to train with the first team. The latter made a good impression on the pre-season tour of the United States.

In addition to absentees at training ahead of the Juventus clash, manager Jose Mourinho was also without Marouane Fellaini, Diogo Dalot, Scott McTominay and Jesse Lingard at training this morning but all four of those players are struggling with injuries.