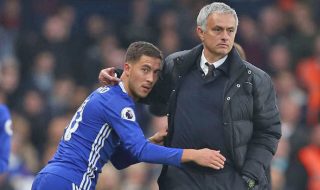 We like to speak to fans of other clubs. This weekend Manchester United travel to Stamford Bridge hoping for a result that will turn our season around. It’s time to build on the dramatic comeback win over Newcastle and what better way to do that than beating Chelsea away from home?

Chelsea have been terrific this season and look like genuine title contenders. Maurizio Sarri didn’t take long to stamp his mark on the English game and their fans have every reason to be buzzing about his start at the club.

The Italian has Eden Hazard playing at his best, but how long will he remain a Chelsea player with Real Madrid sniffing around the Belgian? We speak to Will Faulks of Chelsea-News.co and get his thoughts on Hazard’s future and more.

As a Chelsea fan, what do you make of José Mourinho’s current situation at Manchester United?

It’s hard to watch, as we saw a similar thing happen to us. I was a staunch defender of Jose till the end at Chelsea, and the recent comments from Hazard prove that it was as much down to the players as the manager. But ultimately the difference between now and his second spell at Chelsea is that we spent relatively little to improve the squad for him in that time, whereas at United he’s bought every window and so doesn’t have that excuse to hide behind.

How are fans taking to Maurizio Sarri?

We absolutely love him. We were expecting some great football but some bad results to start with – instead we’ve had great football and great results too. I was really happy we rolled the dice and took a risk, and so far it’s paying off. It took him a couple of weeks on the training pitch to get us playing beautiful football – something that Mourinho convinced us it was too much to expect over the course of a few years. His legacy risks being tainted a little if we keep up this level of performance and flair.

Will fans take issue with Eden Hazard if he’s unable to resist Real Madrid next summer?

I don’t think so. Most importantly we’ve had years of preparing for it emotionally, so we’ve all had a chance to accept that it’s likely. He’s been very open and honest about his desire to go, and that makes it easier to swallow too.

So far it’s been a great match. We’ve paid him shedloads and won him titles and trophies, but on the other hand, we’ve never really given him the platform to compete for the Champions League regularly. On the other hand, he’s given us some superb attacking play and been one of the best players at the club ever; but he’s had off months and even offseasons.

So it’s been a fair exchange in the opinion of most fans. If he feels he has to move to improve his chance of winning the Champions League, most Blues fans will hold their hands up and say that’s fair enough – as long as we get a few hundred million quid for him!

If Sarri doesn’t deliver the Premier League title in his first season as Antonio Conte did, will there be immediate pressure from the stands? We already know the board is likely to take issue with that.

Absolutely not. As I said, we were half expecting this season to be a disaster and Sarri to be out by Christmas. The fact that we’ve done so well has certainly raised expectations, but not quite that high just yet.

Finally, what is your prediction for Saturday?

A really nasty, bitty game. Mourinho can’t afford to lose and he can’t even really afford to play. Your whole team are pretty desperate at the moment and I think that will help you battle your way to a draw – but I reckon it could get a little tasty on the pitch. I hope Eden’s got his extra-large shin-pads ready, let’s put it that way. 1-1 with 6+ yellow cards.