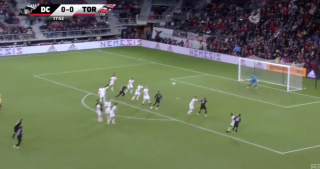 The 32-year-old is undoubtedly enjoying himself in the MLS as he’s bagged his 10th goal of the season in a 1-0 win over Toronto FC.

It was a wonderful strike, as seen in the video below, with Rooney bending a superb effort over the wall and into the back of the net.

How on earth did he strike the ball so elegantly over the wall and past the goalkeeper from distance?

While there is a huge difference in terms of quality and competitiveness in the Premier League and MLS, the pressure is also arguably off the former England international now to prove himself, so it’s only a matter of time before some United fans call for their all-time top goalscorer to return and save the day at Old Trafford…

But that’s not going to happen. Jose Mourinho did the right thing to get rid of Rooney, even though it was our view the two managers before should have made the move sooner.