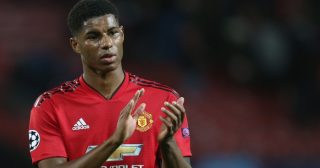 Man Utd travel to the far from happy hunting ground of west London as the Premier League returns after a two-week hiatus for another international break.

Can Jose Mourinho’s men build on our climb-off-the-canvas victory over Newcastle last time out or will this be a (Stamford) Bridge too far for the Reds?

Here is the starting XI that Mourinho is expected to go with.

Fresh from a mixed bag of form over the international break as Spain beat Ryan Giggs Wales but lost to England, ‘Dave’ will retain his place in goal as he simply has to do. Not hit the heights this season but still the best in the business by a distance.

Eric Bailly was substituted after just 19 minutes against Newcastle, so expect Victor Lindelof to come back in alongside Chris Smalling at the back. Marcos Rojo may return, but Mourinho has finally found a settled partnership, one which I expect him to keep faith in during what will be a very stern test of credentials in west London. Shaw withdrew from England duty with England but should be available for this one. If he isn’t, Young may switch to the left and Antonio Valencia would fill in

In midfield, Marouane Fellaini will likely be deployed to combat a dangerous Chelsea midfield consisting of the wonderfully talented trio of the metronomic N’golo Kante, Real loanee Mateo Kovacic and Jorginho, signed from manager Maurizio Sarri’s former club Napoli for £50m in the summer.

Nemanja Matic missed Serbia’s games this week as a precaution, so Fred may return – or Eden Hazard’s nemesis Ander Herrera if he is fit. Paul Pogba should retain his place despite an indifferent performance for France in their friendly draw with Iceland.

Marcus Rashford made way against Newcastle for eventual matchwinner Alexis Sanchez, but a fine performance for England against Spain may tempt Mourinho to give him another chance up front.

Rashford now has three goals and an assist in four England appearances this season, compared to one goal in seven for United. But the nature of his goal against Spain showed he can play off a target man, which bodes well for United. Sanchez deserves to keep his place after the Newcastle comeback, so Anthony Martial may well be the unlucky player to drop out despite also scoring two weeks ago.

This is how some of our followers on Twitter see United line-up:

Got to love this one…