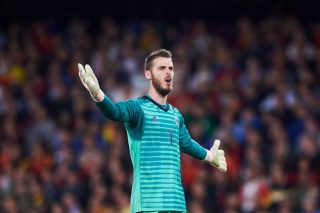 Spain’s struggles from the summer continued this week with a 3-2 defeat at the hands of England in the UEFA Nations League clash at Estadio Benito Villamarin.

Just 24 hours on from the defeat, Spanish newspapers – Mundo Deportivo, Sport, AS and Marca – were critical about their players and Sport Witness brought it to our attention that David de Gea did not receive good ratings after conceding three goals in the first-half.

It reads worse when you consider Gareth Southgate’s side had three shots on target and converted all of their chances.

De Gea ‘continues to be unreliable’, according to the report, who suggest Spain look like conceding whenever the opposition registers a shot on target.

This criticism of De Gea is simply a continuation of what we read in the Spanish press during the summer’s World Cup in Russia.

As translated by SW, it is suggested De Gea is ‘allergic’ to being comfortable in his own area.

It appears as though the former Atletico Madrid can do no right at the moment, especially when it comes to representing his country. This would possibly be a different story had he returned to La Liga when the opportunity arose rather than remain at Old Trafford.