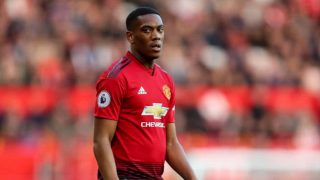 In an article about footballers running out of contract at the end of the season, Tuttosport mentioned two Manchester United stars as potential targets for Serie A clubs.

The Italian newspaper, translated by Sport Witness, doesn’t pull this alleged interest from thin air. Anthony Martial and Matteo Darmian have been linked with Serie A clubs for some time.

Their situations at the club are very different, though both players would appreciate more time on the pitch. Martial’s agent made it clear in the summer that his client wished to leave Old Trafford, with that likely being down to a worsened relationship with manager Jose Mourinho.

On the other hand, there’s Darmian, formerly of Toronto, who wants to return to his homeland in search of cementing a place in a team and playing regularly. He has drifted out of the Italy national side as a result of falling down the pecking order at United.

Tuttosport claims that Martial would be a ‘dream’ signing for Inter Milan, with the Italian giants showing interest in the Frenchman ever since Mourinho listed Ivan Perisic as a target, opening doors to a potential swap deal down the line.

However, The Express ran a story this week suggesting United are confident that Martial will agree on new terms and remain at the club regardless of Mourinho’s situation.