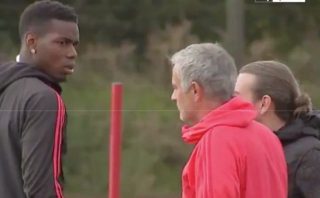 Andreas Pereira has spoken out about the video footage of an apparent disagreement between Paul Pogba and manager Jose Mourinho.

The pair were caught on camera exchanging words in what looked like a tense encounter at the Carrington training complex. Of course, Sky Sports were there to film it.

READ MORE: Man Utd handed boost as Juventus could be without star player ahead of Champions League clash

It was later reported that this clash occurred over the timing of an Instagram post by Pogba in the League Cup defeat to Championship side Derby County.

Pereira has now confirmed that that was the case and that there had been a misunderstanding about the timing of Pogba’s post.

The Brazil international insists in an interview with UOL, brought to our attention by Caught Offside, that his teammate posted it before United ended up losing the game on penalties as opposed to afterwards.

‘We were winning the game 1-0 at the time of the video,’ he told UOL, as translated by the Manchester Evening News.

‘Then we lost the game, and people said that Pogba posted later. But he posted before.

‘The manager [Mourinho] thought that Pogba had posted later. He asked him why that had happened. There was a mood about it. These things were out here in England. But I have nothing to do with it.’

While this has been previously reported, it’s good to finally get some clarification from an insider.

Pereira has a brief spell in the starting line-up at the start of the season, but that has rarely been the case of late. He will have a decision to make soon with his contract set to expire.