It is mind-blowing to think that last season Manchester United finished 11 points and three places clear of Chelsea when things already look drastically different this campaign.

Jose Mourinho has seen his United side struggle over the last couple of months, and are currently in eight place in the table.

Despite that, both teams have quality in their ranks.

We have gone through both squads to decide who would make it into a combined XI of Chelsea and United players.

Form is temporary, class is permanent.

De Gea may not be quite as convincing of late but he’s still the best goalkeeper in the world. Years of phenomenal Premier League performances outweigh a decent introduction to English football for Kepa Arrizabalaga.

Rudiger and Luiz have formed a brilliant partnership this season whereas none of United’s centre-backs have impressed managing to keep just one clean sheet so far. It feels unfair to leave Luke Shaw out, but Alonso is arguably Chelsea’s biggest attacking threat after Eden Hazard, and he’s been excellent since joining the Blues from Fiorentina in 2016.

There’s a reason Mourinho wanted to bring Willian to Old Trafford – to bring balance to his side’s attack, currently heavily loaded on the left flank, which is why we’ve gone with a Martial on that side. Both players are extremely direct, and while they are not renowned for helping out defensively, a central pair of Jorginho and Kante can make up for that.

Jorginho has been a key figure in Sarri’s revelation in the style of play at Stamford Bridge this season. It’s no wonder City, Liverpool and ourselves all tracked him during the summer. Alongside Kante, the ultimate box-to-box midfielder, it’s no wonder Chelsea are excelling.

The only Chelsea player in this front three is, in my opinion, the best player currently in the Premier League. He’s in the form of his life and the likes to Real Madrid are totally warranted.

Like Hazard, Lukaku simply walks into this side but with Rashford also linking up on the attack, few defences will be able to cope with this trio. 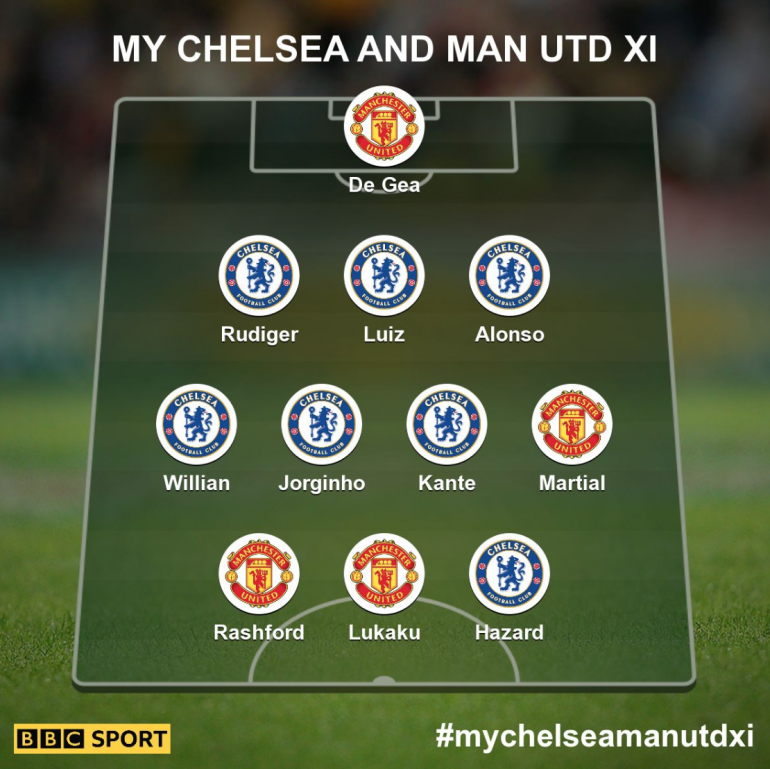 The team was made with BBC’s combined XI feature. Click here to make your own.