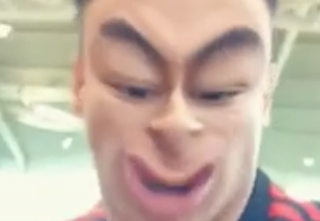 A couple of months ago, Marcus Rashford caused Rio Ferdinand to burst out laughing while he talked through his and his Manchester United teammate Jesse Lingard’s FIFA ratings.

It’s only a video game but it seems increasing that footballers genuinely care about how highly EA Sports rates them.

Rashford – along with Ferdinand – had to re-evaluate Lingard’s ratings, as per the Irish Mirror. When it came to rating Lingard’s physicality, he suddenly lost all faith in the ability of his talented teammate.

After bursting out laughing at what Rashford wrote down on the card, Ferdinand announced: “Jesse he’s given you a zero!”

This joke has seemingly carried on, with Lingard posting a video of him inside the gym talking about gains presumably in an attempt to increase his physicality ratings.

It takes all shapes and sizes, eh?

Lingard is obviously working on his fitness and recovery from injury back at United rather than being away on international duty.

He missed out on Gareth Southgate side’s scoreless draw with World Cup finalists Croatia and the 3-2 win over Spain.

Watch Lingard messing around in the gym below: