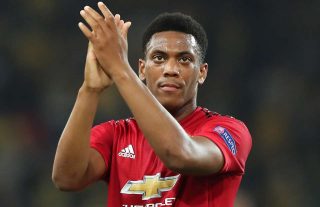 Jose Mourinho tends to fall out with players during his third season is charge at whomever club and Manchester United is not an exception.

We have seen the boss fall out with French pair, Paul Pogba and Anthony Martial, with the latter’s agent making it clear that his client wanted to leave Old Trafford in the summer.

However, as much as Mourinho wanted rid of Martial the club never showed a willingness to sell the French forward.

Now, according to the Daily Express, the club still has no intention of letting Martial leave.

In fact, the report claims they expect the 22-year-old to remain at Old Trafford regardless of what happens manager Mourinho.

On his day, Martial has the ability to change games, but it’s no surprise he no longer gets a look in with Didier Deschamps’ world champions. When you consider Kylian Mpabbe’s development these past three years, since arriving on the big stage with AS Monaco, Martial doesn’t deserve a call-up on the basis of recent performances.

But against Newcastle in United’s most recent outing, Martial finally looked the player we hoped he’d become, linking up brilliantly with Pogba before scoring the equaliser.

It is too early to give a definite verdict, mind.