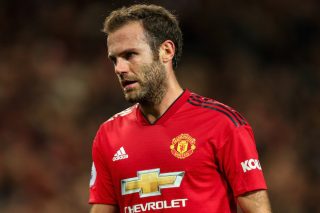 According to James Robson of the Standard, Jose Mourinho has told Manchester United he wants new deals for Spanish duo Juan Mata and Ander Herrera.

The United manager is said to be determined to keep both players at the club because of their influence on a dressing room that has been in turmoil this season.

That may sound hypocritical but unsettlement in the dressing room at United has had nothing to do with Mata or Herrera, two players willing to take instruction from Mourinho whether or not they’re happy with the amount of game time they receive under his management.

The pair are out of contract next summer – but Mourinho has reportedly advised vice executive-chairman, Ed Woodward, to offer new terms to two players who are now considered fringe members of his squad, and they’re both likely to fall further down the pecking order if the Daily Mail can be trusted with their latest transfer update on the manager wanting four new players brought in during the winter transfer window.

It wasn’t that long ago when Mourinho similarly pushed to keep Marouane Fellaini, with the club’s hierarchy eventually relenting over a two-year extension.

Robson says in his report that Mourinho believes Mata and Herrera are a positive force on teammates at a time when he has repeatedly questioned the attitudes of his players.

Mata may not feature as often as he should, but his creativity is something the side often lacks while Herrera’s versatility in midfield and ability to carry out detailed tactical instructions are valued by the boss.

The report also states that there is confidence Anthony Martial and Luke Shaw will sign extensions and that negotiations are ongoing with David de Gea.