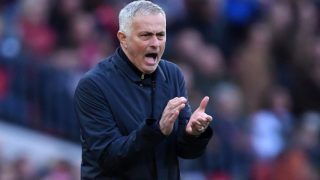 Jose Mourinho has been charge by the FA for allegedly using improper language following Manchester United’s comeback victory over Newcastle.

Mourinho appeared to swear into a television camera as he left the pitch just minutes after Alexis Sanchez headed United a late winner to secure an important victory.

The United manager was already under severe pressure in the hours before Newcastle’s visit, with reports suggesting he would be sacked regardless of the result.

An FA statement read: “It is alleged that his [Mourinho] language at the end of the fixture, as captured by the broadcast footage, was abusive and/or insulting and/or improper.”

Mourinho has until 6pm on Friday to respond to the charge.

#Breaking Manchester United manager Jose Mourinho has been charged over his language captured on camera at the end of the Premier League match against Newcastle, the Football Association has announced pic.twitter.com/QjiwAYTwJ2