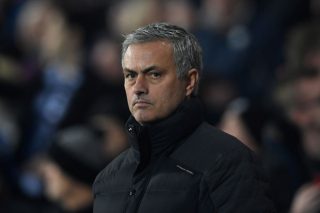 Nemanja Matic is in a race against time to be fit to play against Chelsea on Saturday in the Premier League, according to reports.

The Manchester United midfielder has been undergoing treatment on a back injury, having withdrawn from Serbia’s squad before the international break.

Matic, formerly on Chelsea, where he spent two stints as a player, would have been a certainty to start the game if he was fit, so this news comes as a blow to manager Jose Mourinho considering his inclusion could be a method to contain the in-form Eden Hazard.

In the past, Mourinho has man-marked Hazard, who is currently leading the Premier League scoring charts with seven goals in just eight appearances.

But Matic remains a doubt for the crucial fixture after failing to make a swift return from the back problem, as per Sky Sports. However, this may well see Ander Herrera back in the side…

Luke Shaw is also a doubt for the game at Stamford Bridge and is still recovering from a knock he picked up against Newcastle, prior to the international break.

It is far from convincing that Mourinho will be without some key players going into the tie. Caught Offside have predicted an XI for the game.