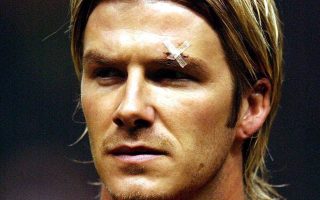 Fallings out in football happen are part and parcel with the game but we don’t always get the entire story. At Manchester United we’ve seen that this season with a training ground row between manager Jose Mourinho and Paul Pogba, but we’re going back a bit further with this one.

When Sir Alex Ferguson kicked a boot at David Beckham…

Probably the most famous issue occurred between the pair when the Scot kicked a boot at Beckham’s face following a loss in the FA Cup.

Think about all those modelling shoots put into jeopardy as the former England international was left with a gash above his eye.

Written in his autobiography, as per the Mirror, Fergie explained the incident including what he said after:

“He was around 12 feet from me. Between us on the floor lay a row of boots. David swore. I moved towards him, and as I approached I kicked a boot,” wrote Fergie.

“It hit him right above the eye. Of course he rose to have a go at me and the players stopped him. ‘Sit down,’ I said. ‘You’ve let your team down. You can argue as much as you like.'”

Fergie also admitted that he knew in the aftermath of the incident that he would have to sell Beckham, who already had been linked to Real Madrid, adding: “The next day the story was in the press. In public an Alice band highlighted the damage inflicted by the boot. It was in those days that I told the board David had to go.

“My message would have been familiar to board members who knew me. The minute a Manchester United player thought he was bigger than the manager, he had to go.

“I used to say, ‘The moment the manager loses his authority, you don’t have a club. The players will be running it, and then you’re in trouble.'”

Fergie’s comment about the minute a United player thinks he’s bigger than the manager reminds us a little of Pogba’s behaviour since returning from the World Cup. There can be no question about him flexing his muscles and trying to undermine Mourinho, who has struggled to keep a number of players on side since the beginning of the new season.

And, it remains to be seen whether the club still agrees with Fergie’s stance that the manager should have the most power and ultimately be backed in any feud with a player. The problem now is the Glazers see Pogba as the driver of their commercial cash cow in 2018.