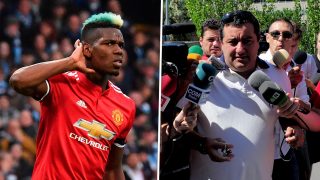 Manchester United superstar Paul Pogba is reportedly edging closer to a move to Barcelona after agent Mino Raiola agreed a deal ‘in principle’ with the La Liga champions.

This is being reported by The Mirror, who claim Pogba has been keen to swap Manchester for Catalunya.

The Frenchman has not got the greatest of relationships with manager Jose Mourinho and tensions have only risen since the 2018/19 football season kicked off.

Pogba returned from the World Cup flexing his muscles much to Mourinho’s dislike, which lead to the France international being stripped of the vice-captaincy. That decision was made by the Portuguese tactician following comments the 25-year-old midfielder made after the 1-1 draw at home to Wolves.

According to Calciomercato, Pogba’s agent Raiola has come to an agreement in principle with the Catalan giants.

This story indicates that Barcelona midfielder Arturo Vidal has been urging manager Ernesto Valverde to sign his former Juventus teammate as the Spanish football giants look to retain La Liga and push for Champions League success.