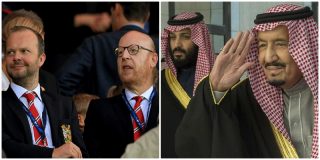 According to The Mirror, Manchester United have dismissed suggestions the Glazer family are ready to put the club up for sale.

Reports have emerged claiming interest from Saudi Arabia crown prince Mohammad bin Salman in a prospective takeover, which could be valued beyond the £4 billion mark.

Meanwhile, The Sun believe the Glazers currently value their most prized asset at £3 billion in a piece they ran on Monday to profile the Saudi prince.

The Mirror claim sources at Old Trafford are adamant the club’s American owners have always maintained their stake is not for sale, and have no interest in discussing any buy-out of United.

The crown prince, who holds the second highest rank in the Saudi government after his father, King Salman, is thought to be interested in investing in a high-profile club following investment ventures in F1 and WWE.

This report also states that the controversy surrounding the disappearance of American-based journalist and critic of the regime Jamal Khashoggi, with allegations he had been murdered following a visit to the Saudi embassy in Turkey, makes any sale impossible.

This adds to the already uncomfortable list of questions about a Saudi regime also under fire for the killing of many innocent civilians following air strikes in Yemen after a military intervention.

They finish the story by adding more from their alleged United sources, who claim that United is not for sale at any price.