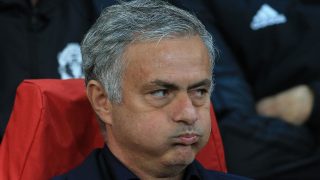 Jose Mourinho has reportedly been assured that his job is safe for the time being as he prepares for some challenging fixtures in the Premier League and Champions League.

Manchester United face joint-league leaders Chelsea away at the weekend, with a clash against Juventus in the Champions League next week.

READ MORE: Man Utd to persuade star to stay by making him the highest-paid player at club

It’s not been the best start to the season for the Reds and Mourinho seems to have bought himself a little bit of time after United’s dramatic 3-2 comeback against Newcastle in our last game, ending a run of four consecutive games without a win.

As noted by the Daily Star, Ed Woodward and Mourinho are said to have met up for talks last week, though journalist Duncan Castles is quoted from the Transfer Window podcast saying it looks like there won’t be any possibility of a change in manager at the moment.

‘It was reported on Saturday (October 6) there was a meeting between Mourinho’s agent Jorge Mendes and Woodward on Friday (October 5),’ Castles said.

‘What came across was that Manchester United did not want to sack Mourinho at this stage.

‘That the noise was coming from outside not inside, that they still believed in him, that they still felt he had been successful in his first and second seasons and were not looking to sack him.

‘It’s been made clear to Mourinho that results have to change, but it wasn’t a dismissal point.’

The pressure was put on the board during United’s last outing against Newcastle as the Magpies went 2-0 up. Rather than call for Mourinho’s head, the Old Trafford faithful chanted: “Jose’s right, the board is sh*te.”

It showed that while many believe Mourinho should be doing better, sections of United’s support will back him over Woodward and the Glazers, who are to blame for the majority of the problems we’re currently facing.