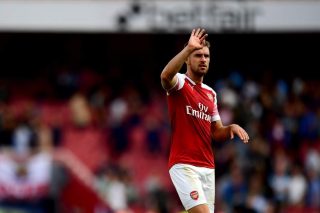 According to Rob Dawson and Mattias Karen of ESPN, Aaron Ramsey is open to joining one of Arsenal’s top six rivals if he leaves Arsenal on a free in the summer.

Ramsey, 27, will see his contract expire at the end of the season unless the Gunners change their mind about rescinding a new deal.

READ MORE: Man Utd to persuade star to stay by making him the highest-paid player at club

The midfielder will take his time to consider his options but is open to staying in the Premier League – even if that means joining one of Arsenal’s direct rivals.

Contrary of recent reports, ESPN claim that Liverpool does not hold an interest in the Wales international but Manchester United and Chelsea are allegedly prepared to monitor the situation in the event he is available on a Bosman.

However, Ramsey is in a position where he can also negotiate with a foreign team from January.

If United do make a move to sign Ramsey this will be their third attempt to land his signature.

We tried to sign him in the summer of 2008 from Cardiff, before Jose Mourinho reportedly instructed his club to get him on the cheap in the most recent transfer window.

So, a decade after first trying to lure Ramsey to Old Trafford, is the time right for the Welshman to make the move?

He’s a decent player and on a free transfer, or potentially a cut-price deal in January, United could do worse. Ramsey would bring the added experience and composure that United are often lacking.

Dawson adds that sources have told ESPN that United are confident Ander Herrera and Luke Shaw will sign new deals to stay at Old Trafford.