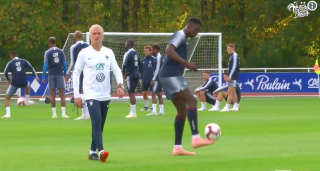 Paul Pogba has been showing off his skills whilst away on international duty.

The official Twitter account for the French football team uploaded a video of Pogba showcasing some alternative keepie-uppies during training.

Manager Didier Deschamps casually walks past his midfielder as if it’s a routine, though if Manchester United boss Jose Mourinho strolled past in such a manner it would be stated that the pair have had another rift on the training ground.

The joys of selective reporting.

Anyhow, for the usual rubbish footballer, like myself, 50 standard keepie-uppies would be an achievement. Pogba adds difficulty by bringing an ‘all-around the world’ into the equation.

France face Germany in the UEFA Nations League on Tuesday. Pogba is expected to start for the World champions in a 19:45 kick-off.