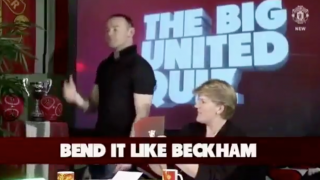 A nice throwback for your Friday morning.

The all-time top goalscorer at Manchester United was handed a rather easy one to act out — ‘Bend it like Beckham’ – and he couldn’t help but make a hilarious reference to Sir Alex Ferguson, who was also in the room.

David Beckham and Ferguson saw their relationship strained when a dressing room argument broke out in 2003, prior to his move to Real Madrid.

Having lost in the FA Cup in February, Fergie was furious with his side’s performance, with Becks being singled out in particular. A dressing room spat saw a flying boot, flung by the manager, hit Beckham in the face leaving him with a cut eye.

When Rooney was trying to act out Beckham, he referenced the former England star getting a smack on the face and looked towards Fergie.

All they could do was laugh, but at the end, Ferguson sarcastically mutters ‘it’s going to cost you’.

Watch the footage below:

Wayne Rooney describing 'Bend it Like Beckham' is one of the funniest things you'll see. Fergie's reaction is priceless! 😂 #mufc pic.twitter.com/tAGNeDcRim