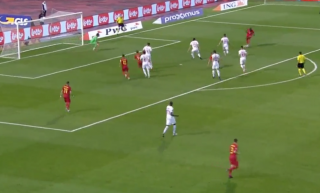 Romelu Lukaku has scored his 44th goal for Belgium in their UEFA Nations League encounter against Switzerland.

The Manchester United striker has been playing on the right side of attack for Belgium against the Swiss, and it is he who opened the scoring for the Red Devils.

Switzerland have had chances in the second half, but with an hour played the scoreline hangs in Roberto Martinez’s favour.

It is interesting watching Lukaku play in a side allowed to attack and full of attack-minded players. He’s not been particularly great tonight but it’s no wonder he looks more prolific on the international stage.

They tend to play a high line in a side full of technically gifted players. Eden Hazard is giving the freedom to roam around attacking positions and he’s gifted enough to unlock the best defences in world football.

But Lukaku deserves credit for this goal — for being in the right place at the right time. It’s not his fault the goalkeeper fucked up…

Now, he needs to do the same for United.