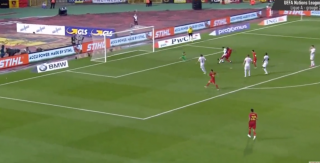 Romelu Lukaku bagged a brace against Switzerland in the UEFA Nations League.

The Belgium frontman scored the opener early in the second half through some dodgy goalkeeping, but the Red Devils were unable to hold onto their lead.

Both sides have had an array of chances throughout the game, though the game finished 2-1 — all thanks to Lukaku’s goals.

Lukaku, who has had mixed form for Manchester United this season, missed a sitter before converting and putting Roberto Martinez’s men back into the lead.

Fans argue he doesn’t get as much service for United, but that’s not entirely true. It’s no secret that the former Chelsea striker needs to be more clinical in front of goal.

Then he may be considered one of the best goalscorers in the game.

It shouldn’t be controversial to say he needs to be doing better.