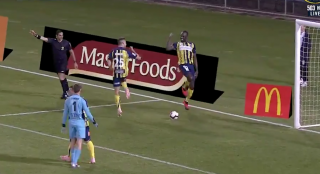 Usain Bolt is off the mark! The world’s fastest man made his debut as a substitute for A-League club Central Coast Mariners in August after they had drafted him.

A couple of months later, Bolt has bagged a brace on his first start for the club.

But it was the 32-year-old’s celebration for his second goal that caught our attention, as he made the most of a goalkeeping error and tapping into an empty net.

BOLT HAS HIS BRACE! ⚡

It is no secret that Bolt supports United, so perhaps he’s been influenced by Lingard!

Fair play to Bolt. Here’s hoping he can continue to impress and earn himself a contract with the Mariners…