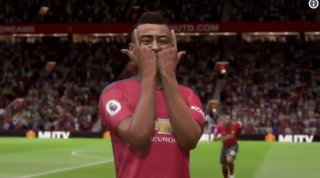 It’s almost been a month since the big release of FIFA 19.

Footballers up and down the country have been telling EA Sports what they want to see added to the latest edition, whether it’s upgrades for skills or new fancy haircuts. (They would hardly be able to keep up with Paul Pogba)

One of those players was Manchester United star Jesse Lingard, who requested to have one of his many celebrations added to the game.

The England international reacted on Twitter and shared a video of the in-game celebration.