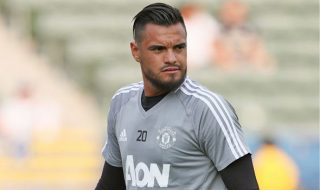 Manchester United second-choice goalkeeper Sergio Romero was not happy to miss out on the World Cup this past summer.

He suffered a knee injury prior to the competition but still felt his country should have took a risk and let him board the flight to Russia.

At the time, the player’s wife spoke out about the situation, taking to Twitter to suggest all wasn’t right with the decision making process, that Romero would have been fit enough to play.

But given how Romero has struggled with fitness ever since, perhaps the Argentina staff had a point not bringing him and we’re unsure he would have made much of a difference to their woeful World Cup campaign.

Thankfully, this has all been brushed under the carpet and Romero can move on. The keeper is currently on international duty and has been quoted by TycSports, translated by Sport Witness: “I waited a lot, thank god the recovery was better day by day and now I have to play, it’s a place I love being and I want to be until the body does not give more.”

The last time he played for United, the Argentine shot-stopper was sent off against Derby County in a League Cup clash we lost on penalties.

If it bothers Romero so much not to play for his country, it’s mind-boggling that he has not attempted to get a move from United in search of first-team football. Perhaps he fancies his chances when the time comes for David de Gea to leave… (hopefully never)