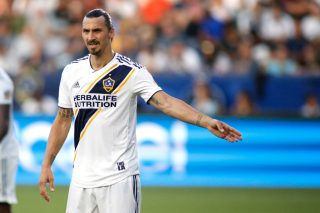 The romance between Zlatan Ibrahimovic and Manchester United could yet be rekindled, according to reports today.

Zlatan, 37, is currently playing in the MLS with LA Galaxy but has been linked with a move to Europe in January during the close season in America.

AC Milan has been mentioned as a possible destination for the Swede, and now ESPN is flagging the possibility that Ibrahimovic returns to Old Trafford for a portion of the season.

Romelu Lukaku has struggled this season and has looked shattered since returning from the World Cup (watch him net a brace tonight against Switzerland), but Mourinho has hardly shown signs that he is concerned about the Belgian striker by playing him each week – even in the League Cup defeat to Derby County.

United have other players such as Marcus Rashford, Anthony Martial and Alexis Sanchez who can all play that central role, and I’d much prefer to see the Chilean given more roles in the team than bringing Ibrahimovic back.

Of course, it’s a great story but Ibrahimovic wasn’t himself during his second campaign at United and there’s no reason to believe anything has changed. Everybody knows the MLS is played at a much lower standard than the Premier League.

Zlatan scored 29 goals in 53 appearances for United, with 28 of those coming in his first season before it was curtailed by a serious knee injury suffered in the Europa League.

However, ESPN claims that Mourinho may covet his influence in the dressing room.

Yet the value of him returning to Old Trafford would not be measured in goals by Mourinho. The true worth of Ibrahimovic to the under-pressure Mourinho would be the Swede’s influence in the dressing room.

To some at United, it is not a coincidence that disharmony within the squad has become an issue since Ibrahimovic moved away.