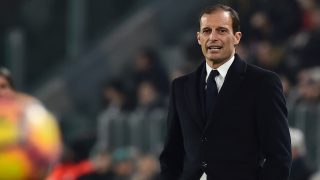 Massimiliano Allegri could be the man to take Jose Mourinho’s job as Manchester United, according to reports in Italy.

The Italian was closely linked with the Arsenal job following Arsene Wenger’s departure at the end of last season, but the Gunners opted for Unai Emery.

According to Calicomercato, United are interested in appointing the current Juventus manager in order to start a “new era”, after a disappointing period with Mourinho in charge.

The report boldly claims there has already been contact between United and Allegri’s entourage, “just to explore his availability to accept the assignment” and they even state Allegri’s response was a positive one.

Allegri’s main objective for Juventus this season is to end the 23-year wait for European success. An era in which they’ve dominated much of Italian football.

The Iron Lady went out and spent a fortune to bring Cristiano Ronaldo to the club this past summer. There has since been talk of more premium signings, but the pressure is on to deliver the big prize now after coming so close in recent years.