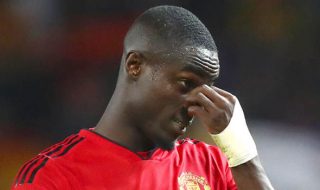 According to ESPN’s Rob Dawson, Eric Bailly is ready to consider his future next summer if his prospects at Manchester United do not improve.

The defender started 15 games across all competitions last season and has been restricted to three Premier League starts so far this term.

It seems like we get a spell of Bailly in form, then after a bad display or two, he vanishes.

That’s far from ideal for a 24-year-old centre-back, who has previously suffered from niggles and knocks, and the aim for manager Jose Mourinho should be to see him on the pitch as often as possible.

After all, it was Mourinho who made Bailly his very first United signing and he hasn’t kicked on from his debut season as we had hoped.

Bailly has been linked with moves to Arsenal and Tottenham but sources have allegedly told ESPN that he is determined to give himself at least until the end of the season to win a regular place in Mourinho’s team.

The sources in question add that United would be unwilling to sell unless the player made it clear he wants to leave. Dawson’s report also states that they would be reluctant to sell to a Premier League rival.

Mourinho made it clear he wanted to sign a new centre-back in the summer, but vice executive-chairman Ed Woodward failed to deliver on that front. It has been reported that Mourinho has since turned his attention to Inter Milan’s Milan Skriniar and Alessio Romagnoli at AC Milan ahead of the January transfer window.

Could that push Bailly further down the pecking order?