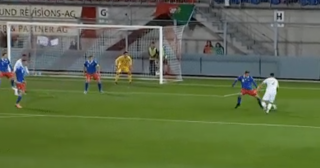 Manchester United fans have every right to be excited about the future of Diogo Dalot.

Although his appearances in the first-team have been few and far in between, Dalot has shown real promise and some already believe he should be starting at right-back ahead of Antonio Valencia and Ashley Young.

Bundesliga starlet admits Man Utd is his favourite club; wants to play for Reds one day

Jose Mourinho will be wary of throwing a 19-year-old too early, however, and it might not be until next season that we see Dalot frequently in action.

A video has emerged online capturing footage of Dalot who appears to be playing for an underage Portugal side.

Like a young skilful Cristiano Ronaldo, Dalot faints past a defender with a stepover before having a crack at goal.

Unfortunately he doesn’t score but if Dalot can get into those positions for United, he’ll surely net a few!