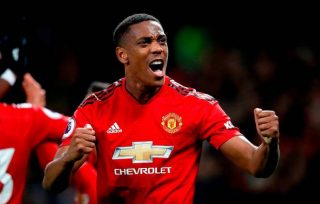 Last time out in the Premier League, Manchester United pulled off an impressive comeback victory against Newcastle at Old Trafford.

Jose Mourinho’s men put in an excellent second-half performance after Newcastle headed into the break 2-0 up.

READ MORE: Giggs will be ready to take the reigns at Man Utd, claims Guillem Balague

Juan Mata started the comeback with a sublime free-kick.

France international Anthony Martial levelled the match for United, while Alexis Sanchez came off the bench to score a late winner.

But details have emerged stating Martial’s goal against Newcastle was an expensive one for United.

The 22-year-old has now scored 25 goals since joining from AS Monaco. That landmark has triggered a fresh expense for United, as per The Telegraph, stating the following:

The France forward’s 76th minute equaliser at Old Trafford on Saturday was his 25th Premier League goal for the club and triggered a clause in his contract entitling his former club Monaco to a €10 million (£8.73 million) windfall.

United paid Monaco an initial £36 million when they signed Martial in September 2015 but the cost of the transfer has now risen to what is expected to be a final fee of £44.73 million.

At this point, #MUFC might as well appoint Jardim as manager. They’re basically paying for him to be out of a job, since he's set to make around €8m from being fired, and they have to pay Monaco £7.2m (€8.2m) because of Martial’s goal against Newcastle.

Martial is under contract at Old Trafford until 2019, so time is running out for both parties to agree on an extension package.

He is one of 11 players who could leave Old Trafford for free at the end of the season.