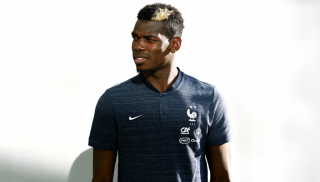 Paul Pogba has taken advantage of his time away from Jose Mourinho by getting a fresh haircut, called the ‘Pogflash’, while on international duty with France.

The French midfielder, said to be unsettled and chasing a move to Barcelona after ongoing rows with manager Mourinho for the past year, has once again shown when it comes to being flashy off the pitch, there are few who can match him.

Adding to his blonde highlights, the 25-year-old has got a lightning bolt, which resembles DC superhero The Flash.

We don’t usually care about haircuts, but this is a nice break away from reporting about ‘X Club’ wanting ‘Y Player’ from United, and Pogba has been caught up in that storm too.

The World Cup-winners take on Iceland (October 11) and Germany (October 16) in the coming days before Pogba and his teammates return to their respective clubs.