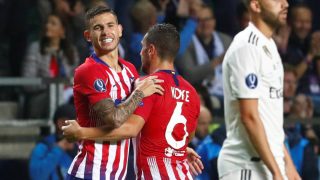 Jose Mourinho was desperate to sign a centre-back in the summer transfer window but United’s board refused to pay over the odds for likes of Toby Alderweireld, Harry Magure and Jerome Boateng.

That led to a dismal start to the season, with United conceding 14 goals in the Premier League and positioned eighth. Mourinho is reportedly looking ahead to January and according to the Metro, he has spoken with executive vice-chairman Ed Woodward about potential targets.

Spanish outlet Marca claims the Reds have made a ‘dizzying offer’ for Atleti defender Lucas following his heroics at the 2018 World Cup with France.

There are already a number of French internationals in the United squad, including Anthony Martial and Pogba, who have all had issues with manager Mourinho over the past three years.

However, it’s claimed United have told Lucas that they will double his current wages if he agrees to complete a move to Old Trafford — and he is open to the move.

It is understood that both Manchester City and Real Madrid will be moving in for the 22-year-old, who can play at left-back and centre-back. He already rejected a move to Los Blancos during the summer.

‘I didn’t listen to it much. I was 100 percent committed to my club and also had just renewed my contract,’ he told French outlet RMC earlier this week.

‘My agent told me and as soon as he said Madrid were interested I said I couldn’t do it.

‘Atletico are my city, my club, they have given me everything. ‘I am an honest person and I couldn’t go to Madrid.’

Lucas has a €80 million (£70m) buyout clause in his contract, so United or whoever seals his signature will have to splash the cash.