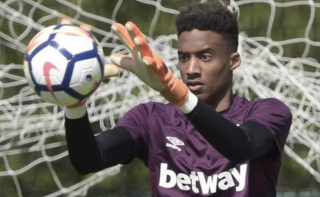 The 19-year-old joined the Hammers last summer and has already emerged as one of the fastest rising talents in the English game, playing for the England U19s that won the European Champion last summer.

According to the Mirror, United, City and RB Leipzig are all monitoring Trott’s contract situation as they ponder moves.

It is said that Trott was wanted by a number of clubs on loan this past summer until West Ham decided it was best for him to stick around as third-choice goalkeeper.

Trott’s current contract expires in 18-months and it is understood, as per Claret & Hugh, that the Hammers are desperate to tie him down to fresh terms.

He has yet to play a senior game for West Ham, though clubs would have been made aware of his performances at U23 level.

West Ham are facing a battle to secure the long-term future of England prospect Nathan Trott. Manchester duo City and United plus Germans RB Leipzig, now regular watchers of young English talent. The Hammers are trying to tie him down to a new deal.