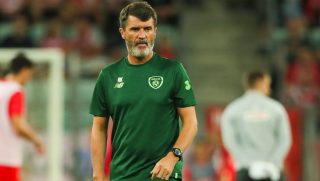 Manchester United legend Roy Keane is currently assistant to Martin O’Neill with the Republic of Ireland, but he is eager to get back out on his own.

Keane has aired his determination to get back into club management but he is under contract with the FAI until the end of the qualification process for Euro 2020.

Were the Irish to miss out on a place at another major tournament, then a change in the dugout may be the next step, allowing Keane and O’Neill to go their separate ways.

That was free Keane to explore other options, though after all was revealed from his argument with Jonathan Walters and Harry Arter, sources speculated to Stretty News that he feared his reputation had been tarnished and that it would be difficult to land jobs in the future.

“This idea I’d be looking at a club and thinking ‘I fancy that one’, I don’t work that way, I don’t network,” said Keane, as per Goal.

“I just focus on the job in hand and that’s a big one with Ireland.

“But hopefully soon I’d like to become a manager again but we’ll see what happens. It’s just getting that offer and challenge that will rock my boat.”

Keane concedes that he won’t expect to walk into a high-profile post after being out of the club game for so long.

It will also see his style of man-management questioned immediately after recent fall-outs in the Irish camp.

“There’s no doubt in my mind that I could go in there and get a club promoted with the right support.

“It would depend on the club and the people involved.”

Ireland opened their 2018 Nations League campaign with a shocking 4-1 defeat to Wales. They are due to face Denmark on Saturday before facing the Welsh again, in Dublin on Thursday.