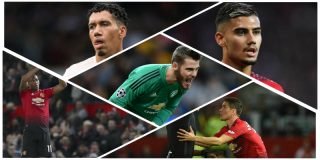 A Manchester United starting line-up consisting entirely of out-of-contract players when their existing deals expire at the end of the season. It’s yet more damning evidence of how this club is being run when the futures of an entire team’s worth of men are yet to be decided.

Although none of them was brought in by current manager Jose Mourinho, the club definitely has to keep hold of a few of them.

Though a couple of them are fringe players in the current squad, many are peripheral figures as well. Here we take a look at which of these players should be offered fresh terms and which of these have to be offloaded.

De Gea has almost single-handedly kept United buoyant and without the best custodian on the planet, I shudder to think where we’d be. Undoubtedly the only player in the squad of genuine world-class ability, ‘Dave’ has lifted the Sir Matt Busby Player of the Year Trophy in four of the last five years. There’s no question as to whether Ed Woodward should offer him a new contract. At his best, the Spanish international is the best shot-stopper in the world and is currently an indispensable member in the squad. It’s impossible to replace the best in the business.

Martial started his United career in dazzling fashion with a debut goal against Liverpool. He then continued to impress but has turned into a fringe figure in recent times. The Frenchman is prolific a goalscorer but doesn’t seem to be a favourite under Jose Mourinho. It would be best for both parties to part ways at this point. Martial is still very young and deserves to play regular football due to his quality. It would be a lot of talent to just waste on the bench.

Club captain Valencia has completed a decade of loyal service for the club and developed into the best right back in the league during the latter days of Sir Alex. Time, however, has caught up with the 33-year-old and he simply isn’t good enough now. Will receive a well-deserved testimonial but sentiment cannot get in the way. He’s become a liability and his time is up. Has to go.

A combative and hard-working player, Ander Herrera was a favourite under former manager Louis Van Gaal, who signed the midfielder from Athletic Bilbao. But since the arrival of Jose Mourinho, he has mostly been restricted to substitute appearances.

The 29-year-old should definitely aim to make a move away in search of first-team football and Man United must not stop him.

Without question my favourite United player in the current squad, Mata is at something of a crossroads under his former Chelsea boss. Not a fringe player but not a regular either, Mata is technically gifted and a set piece specialist, he may not be the quickest and tallest players, in many ways he fails to fit Mourinho’s identikit but a part of me would die inside if our number 8 was moved on – I genuinely think I’d cry – he needs to play as a number 10 and not out wide to maximise his status as string-pulling creator in chief. I’m probably letting sentiment and emotion do the talking here – and many will say he shouldn’t get a new contract – but there’s no way I can bring myself to allow Mata to go.

The one bright spot in a dark season for the Reds, Shaw has made the left-back spot his own and has been like a new signing for us – arguably our player of the season so far. His superb form has been rewarded with an England recall and the player finally looks to have put his injury problems – and very public bust-ups with Mourinho – behind him. Belatedly fulfilling the potential that was clear for all to see when he was at Southampton, a new deal for Shaw should be a no-brainer for the hierarchy.

Like Valencia, Young is an ageing converted winger who has served United well, but he’s no longer up to standard and has more bad games than good. The United defence needs a major overhaul and Mourinho needs to realise that all of Sir Alex’s banter back four cannot remain Man United regulars. There’s an argument to be had that Young could stay on as a squad player, but he’s not good enough, doesn’t offer anything either in attack or defence and there can be very little justification for keeping him here.

Has seen game time this season, not good enough yet to become a regular but certainly should not be let go. Young talent should always be allowed to come through and develop and it would be best for Pereira to get a new deal and then be loaned out. Tricky and creative if a little lightweight – the young Brazilian has caught the eye when given a chance this term.

Matteo Darmian, Chris Smalling, Phil Jones – No explanation needed, how any of them have survived at this club for so long is simply beyond me. Enough said. OFFLOAD all three.