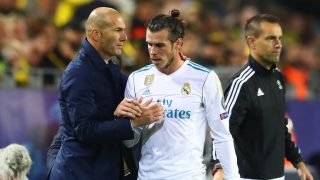 Manchester Evening News has lifted reports from Spain which state Gareth Bale’s heroics in the Champions League final all but ended any chance of him joining Manchester United.

READ MORE: Zidane not the only Frenchman in contention for Man Utd job

Perez reportedly promised former manager Zinedine Zidane he would see the Welsh forward lasts summer before allowing the Frenchman to spend a portion of the fee on recruiting another star player.

A number of star players were lined up to make the move to the Bernabeu, including Mohamed Salah, Eden Hazard and Harry Kane, though it wouldn’t surprise anyone if Zidane has Kylian Mbappe in mind.

However, after Bale’s outrageous winner to secure a third successive European title Perez changed his stance and is even quoted as suggesting he ‘is better than Cristiano Ronaldo.’

El Pais claims Zidane was convinced as a result to quit Real Madrid after having the promise broken by Perez.

United had been heavily linked with a move for Bale but it never quite materialised.

With Zidane apparently keen to take Jose Mourinho’s position as United manager, does that put an end to the annual Bale links?