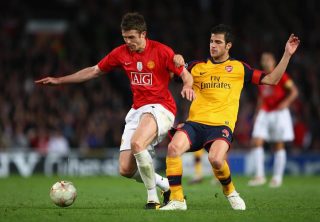 Michael Carrick has revealed in his new autobiography that he was on the brink of joining Arsenal in the summer of 2004 before a teenage Cesc Fabregas derailed the deal.

Carrick was playing in the first division with West Ham at the time. The Hammers were under financial strain and keen to offload players. A number of clubs came knocking on the door but it was Portsmouth who became frontrunners and with the new season beginning in just a matter of days Carrick drove to Heathrow to meet Harry Redknapp.

But just as Carrick was in the car, his agent received a call from David Dein, who was Arsene Wenger’s right-hand man. A request was made to Carrick for a formal meeting with the Arsenal manager.

“We were driving past his home in north London, so we arranged to call in on the way,” Carrick said in an excerpt from his upcoming autobiography published in The Times.

“Within an hour I was sitting in the front room of Arsène Wenger’s house, pinching myself. Could this really be happening? Arsenal! Could I really be on the verge of signing for the Invincibles who’d just gone through the season unbeaten?”

Wenger told Carrick that he would get in touch after Arsenal’s Community Shield fixture two days later.

Then Carrick called Redknapp to let him know about the offer as Arsenal and West Ham began to negotiate a fee. Little did Carrick know there would be a twist in the tale.

A 17-year-old Spaniard was about to make his debut against Manchester United in Cardiff.

“I saw that a kid, Cesc Fàbregas, only 17, started in Vieira’s place. Fàbregas played a blinder but I didn’t think too much about the significance. I sat at home on Sunday night waiting for the call to arrange details of the next day. Arsenal! I couldn’t wait.

“But I waited, and waited, and that call never came. The next day, I had to go into training at West Ham instead and, on the way, David phoned to say he’d had a call from Dein. David relayed the gist of his message, like, ‘I’m sorry, the manager says we don’t need Michael. Fàbregas is coming through like he is. Sorry, the deal’s off.’ Fàbregas’s performance changed Wenger’s mind about needing me.”

Redknapp thought this was an opportunity to take advantage of, but for Carrick the time was no longer right. It wasn’t long before Carrick would make the move to Tottenham for two years and eventually United.

I’m so excited to share with you the cover of my autobiography – Between the Lines, which comes out on 18th Oct. All my profits from the sale of the book will be donated to @_MCFoundation – helping children feel safe & inspired to achieve. Pre-order here: https://t.co/MJO5pDSUoY pic.twitter.com/M2jsKPotPd