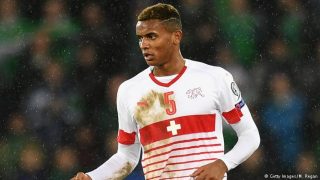 Borussia Dortmund defender Manuel Akanji has revealed his ambition to play for Manchester united in the future, having been a fan of the club since his earlier years.

The 23-year-old moved to Germany FC Basel back in January and has quickly emerged as a frequent member of Lucien Favre’s starting eleven.

The Dortmund centre-back is also a regular in Switzerland’s squad and he played a prominent role in their run to the last-16 of the World Cup this summer.

Meanwhile, in Manchester, Jose Mourinho is struggling to find a solution to his side’s weakness in defence and he may look into the transfer market when it reopens in January or next summer.

According to Bluewin, translated by Caught Offside, Aknji has admitted he would love to play for United one day, as he told reports on Thursday: “Many know that Manchester United has been my favourite club since childhood.

“It would be nice to play there once. But that’s not an issue right now. I am very satisfied in Dortmund, I want to win BVB titles and compete with the Swiss national team in many more big tournaments.”

As things stand, BVB are on top of the Bundesliga after seven matches this term, with five wins and two draws to their name. They’re also four points ahead of defending champions Bayern Munich, who are also said to be on the lookout for defenders.

But there’s every reason Dortmund will put up a fight to keep Akanji. They should fight against losing their best or most promising players most years.