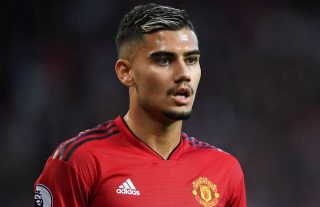 Andreas Pereira has explained in an interview with ManUtd.com why he opted to have the name ‘Andreas’ on the back of his shirt in 2018/19.

The versatile midfielder, who returned to the club after a loan spell with Valencia and is pushing for more game time in the first team after a bright start to the campaign, is similar to Alexis Sanchez in respect of the choice of name.

Pereira’s performances at the beginning of the season saw him become a fully-fledged Brazil international, though Jose Mourinho has not selected him as often in recent weeks, a decision that usually leads to raised eyebrows.

The former PSV Eindhoven youth player has revealed that the reasoning is not keeping with the South American country’s tradition of often using a single name as is the case with Fred.

”It’s because a lot of players have Pereira,” he told MUTV. “My dad used to play with Pereira on the back and I wanted to change because, in Belgium, everyone knows I’m the son of my dad. The son of Pereira. I wanted to change that and start my own way and be Andreas on my own and be known as Andreas.”